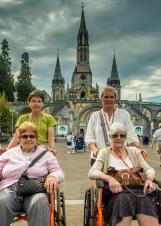 Lourdes is an important pilgrimage location for Catholics from all over the world, and attracts millions of people every year.

When Dr Michael Strode founded HCPT, it was to organise pilgrimage holidays to Lourdes – in response to Our Lady's invitation. By going to Lourdes for nearly 60 years, and nowhere else, we have become experts in offering the best possible pilgrimage holidays. We've also become firm friends with the Lourdes authorities and with local hotels and retailers.

The main attractions – like the Grotto where Saint Bernadette experienced her apparitions of the Virgin Mary, and the Torchlight Processions and Blessed Sacrament Processions – centre around the Lourdes story.

During HCPT's Easter and Summer pilgrimages we visit many of these places, and explain the Lourdes story, as well as experiencing the beautiful countryside of the Pyrenees.

Our Lady (as Mary, the mother of Jesus is sometimes known) appeared 18 times to Bernadette Soubirous (St Bernadette) between 11 February and 16 July 1858. A number of messages were left with Bernadette including a call to pray for sinners and to build a chapel on the site. 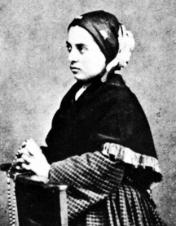 St Bernadette of Lourdes was a saint born on January 7, 1844 in Lourdes, France. Aged 14, and in bad health, she witnessed 18 Apparitions of the Virgin Mary. When she reported these visions, members of the church and civil authorities attempted to force her to recant her accounts.

She refused, and word spread about the Grotto she had found with supposed. Napoleon III's wife helped her achieve her vision to build a church at the cave. Lourdes emerged as a pilgrimage site for worshippers from around the world. She died on April 16, 1879 and was canonized as a saint in 1933 by Pope Pius XI.

To find out more about the story of St Bernadette see our animated retelling of the story: