Doctor Michael Strode, or Brother Michael as he was sometimes called after becoming a Cistercian monk, was born in Woking (Surrey) on 5th June 1923.

He was educated at the Old Malthouse Preparatory School near Swanage from 1932 – 37 and then at Haileybury College until 1941. He decided to become a doctor and was accepted to train at St Thomas's Medical School in 1941, graduating from there in 1946 with a MB-BS from London University. During this time he became increasingly attracted to the Catholic faith, and was received into the Church on September 15th 1945. Michael's first appointment was as Junior Medical Officer at St Thomas's and he served in this post from November 1946 until he was called to do National Service in 1947. He elected to join the Navy and became a Surgeon Lieutenant in the RNVR in this year. Regrettably, towards the end of his service, he contracted pulmonary tuberculosis. 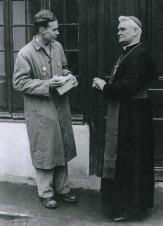 At this time there was no quick cure for this disease and Michael had to spend most of 1949 in the naval hospital at Haslar, where he started to make a slow recovery. This was completed when he transferred to the King Edward VII Chest Hospital at Midhurst in Sussex, but not until late in 1950. When he was well again Michael decided to update and expand his medical experience fairly rapidly (bearing in mind that it had been over three years since he had left St Thomas's), and took three appointments in fairly quick succession. These were as House Physician at King George V Chest Hospital, House Physician at St James's Hospital in Balham and Resident Medical Officer at the Sydenham Children's Hospital, from which he left to join Chailey Heritage in July 1953. He worked at Chailey until his retirement in December 1988.

Michael made his first pilgrimage to Lourdes in 1951, travelling with the Birmingham diocesan pilgrimage. In 1954 he and his friend Peter Keevney took a group of disabled children from Chailey to Lourdes as part of the Birmingham pilgrimage. This was a great success and two groups visited Lourdes from Chailey in 1955, one with the National Schools' pilgrimage at Easter and one in July, again with Birmingham. In 1956 HCPT was founded and the first Trust pilgrimage took place in 1957, Michael was unfortunately not able to take part since he had to be re-admitted to hospital with a recurrence of TB. However, this was soon overcome, and he was able to accompany the HCPT pilgrimage in the Lourdes centenary year of 1958. 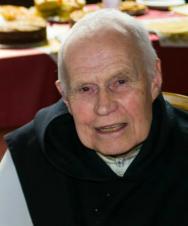 Though not troubled by any recurrence of TB Michael has had some further health problems, notably an operation for a slipped disc in 1972 (when he attended the pilgrimage in a wheelchair) and a coronary thrombosis in 1986, which prevented him from coming on the pilgrimage. Happily he made a full recovery. During all these years Michael was playing a full part in the HCPT as Chief Medical Officer (until 1990) and as a Governor of the Trust. In 1975 he was awarded the KSG at the opening of Hosanna House. The last year in which he participated as a doctor with HCPT was in 1990. In October 1991 Michael entered a Cistercian community as an Oblate. He took simple vows on 4th June 1995 and made his final commitment as an Oblate on 7th June 1998.

He last travelled to Lourdes to join the 2013 Easter pilgrimage, during which he was awarded the prestigious Médaille Notre-Dame de Lourdes in recognition of his long dedication to pilgrims and pilgrimages to the Shrine.

From 2016 he lived in a care home in Cardiff. Until his death on 27th December 2019 he continued to play a very active role in the running of HCPT.

Since Br Michael's passing, the inspiration of his humility and his Christian witness has led a group of people to look into the possibility that Br Michael might be recognised by the Church as a saint and, if so, to promote the cause of his canonisation.

To find out more, and to help, see: www.brothermichaelstrode.org