A youthful route to leadership

A youthful route to leadership 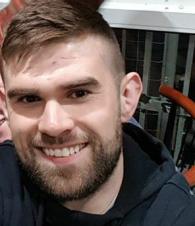 Despite still being in his 20s, Liam has had a long association with HCPT - most recently as a leader of a Summer group. He spoke to us about his time with the Trust and how the Youth Development Programme (YDP) gave him the knowledge and confidence to take up a leadership role.

"I first travelled with HCPT at Easter as a child. I'm Catholic, so already knew all about the story of Lourdes before I went. I remember finding the Torchlight Procession to be so spectacular.

"Our family kept in contact with HCPT, and a few years later my mum decided that she would like us to return to Lourdes as a family. That time we stayed at Hosanna House for a Summer pilgrimage. It was a completely different experience from Easter, but just as rewarding. The house and its views are both so amazing.

"I travelled for the first time as a helper in 2013, with that same Summer group. It was wonderful to see from that role just what the beneficiaries got out of it.

When I heard about the chance to become more involved with the Trust through the Youth Development Programme I applied. Thankfully I was successful. I got stuck in, becoming involved during the run up to that summer's pilgrimage. I helped with the fundraising and admin, that sort of thing. During the week at Hosanna House I got extra responsibilities than you would as a helper. All that was so useful as it gave me a proper insight into what leading a group would be like. It's a big step to become a leader, but I was really supported by other members of the group, my region and HQ.

Having graduated from the programme, and taken up leadership of his longstanding group, Liam is now offering the chance for others to take up the opportunity. Two people are joining him this summer in that role. Liam explains, "It sounds obvious, but youth are the future of any organisation. HCPT are doing a great job of keeping young people involved, including with its regional youth representatives. I'm proud to one of those!

"YDP gives you loads of responsibility, and gives you a chance to develop yourself within HCPT – and gives you skills and experience you can use well beyond. I would definitely say to other young helpers looking to develop within HCPT, just get involved as much as you can!"

If you're aged between 18 and 25 why not email us find out how you too can benefit from the HCPT's YDP.