HCPT is all about simple, natural moments

HCPT is all about simple, natural moments 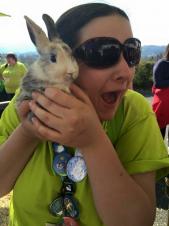 HCPT's Welsh region is leading the liturgies for HCPT's 2019 pilgrimages. We spoke to Jenni, leader of our of our pilgrimage group in Wales, about her involvement with HCPT.

"I first travelled in 2012, having previously helped my mum – who is the group nurse – with fundraising. I didn't really know what to expect from an HCPT pilgrimage. You hear people talking about what it's like, but you can't really picture it. When you get there it makes sense."

"There are so many things I enjoy about travelling with HCPT, and those things change every trip. I remember one year we went to the beach. Quite a few of the children in our group had never been to a beach before! It was wonderful to to see them enjoying themselves on the sand and in the water!"

"I won't deny that leading a group is sometimes challenging, but there is always someone in another group or at HQ who will help you out. I've got a reputation for being really organised. This year, one of the other Welsh leaders sent me a text two days before the pilgrimage, asking if I was at the airport yet! Leading a group is also really rewarding – not least seeing the smiles on the faces of the children and helpers you travel with."

"Many of the children in my group go to the school I work at. It is lovely to see them achieve things in Lourdes that neither they nor I knew they were capable of! This year we took a boy who has cerebral palsy. He drives his wheelchair using sensors in his headrest. He normally gets tired from doing that after 20 minutes. But at Trust Mass he kept going for a whole two hours!

"Another year we took a girl who has a tendency to lose concentration during conversations. But in Lourdes she was alert and attentive the whole week. One day I looked over at her and another child we took. They were hand in hand, chatting away. For me that's what being in Lourdes with HCPT is about – simple, natural moments!"

Find your nearest HCPT group to start or continue your HCPT journey!