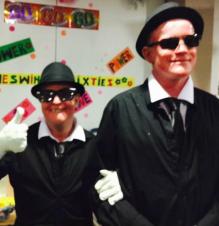 Robert is 26 and his brother Michael is 22. They both have a rare genetic condition where their skin grows too quickly, making it constantly dry and flaky. There is no cure, and they need baths and the application of creams twice daily. In addition, Robert contracted meningitis soon after his birth, which resulted in his having a learning disability.

Travelling for the family is quite a task, not least because of the amount of luggage they have to bring. Carolyn explains, "For the week in Lourdes we had to bring 20 kilos of creams for Robert and Michael, plus many changes of clothing. Most washing machines cannot deal with all the cream on the garments. Having so much to bring is difficult, which is why our stay at Hosanna House was the first time we had ever been away for a full week! People in the group were so good helping us with our bags."

The family had a good, busy week at Hosanna House – with visits to the Shrine, the mountains and the lake nearly. The evenings too were filled with fun and activities. Talking about their pilgrimage holiday, Carolyn says, "Michael loved it. He liked that no one stared at him, and that everyone spoke to him as you would any 22 year old. So often people just assume he has a learning disability like Robert does. Michael is a talented musician. He brought along his violin and joined in with the musical group for the week. He liked being included. We all felt like that. For instance, we're not Catholic, but we felt really welcomed in the worship. It was wonderful to be part of such a lovely group of people.

"The stay was good for Robert's confidence too. At home he can tend to be a little clingy. But at Hosanna House he is more than happy to spend time with other people. In fact, he really liked making new friends. It was so reassuring for me to know he is safe with the group, and that there is always someone around if he
needs anything. He also loved all the activities that we got up to during the week. The stay at Hosanna House was also so relaxing for me. I could look at that view of the mountains all day, and be thoroughly happy.
We all definitely came back recharged, spiritually and otherwise. We're all looking forward to going to Hosanna House again."

Find out about you or someone you know can enjoy a Summer Pilgrimage at Hosanna House.